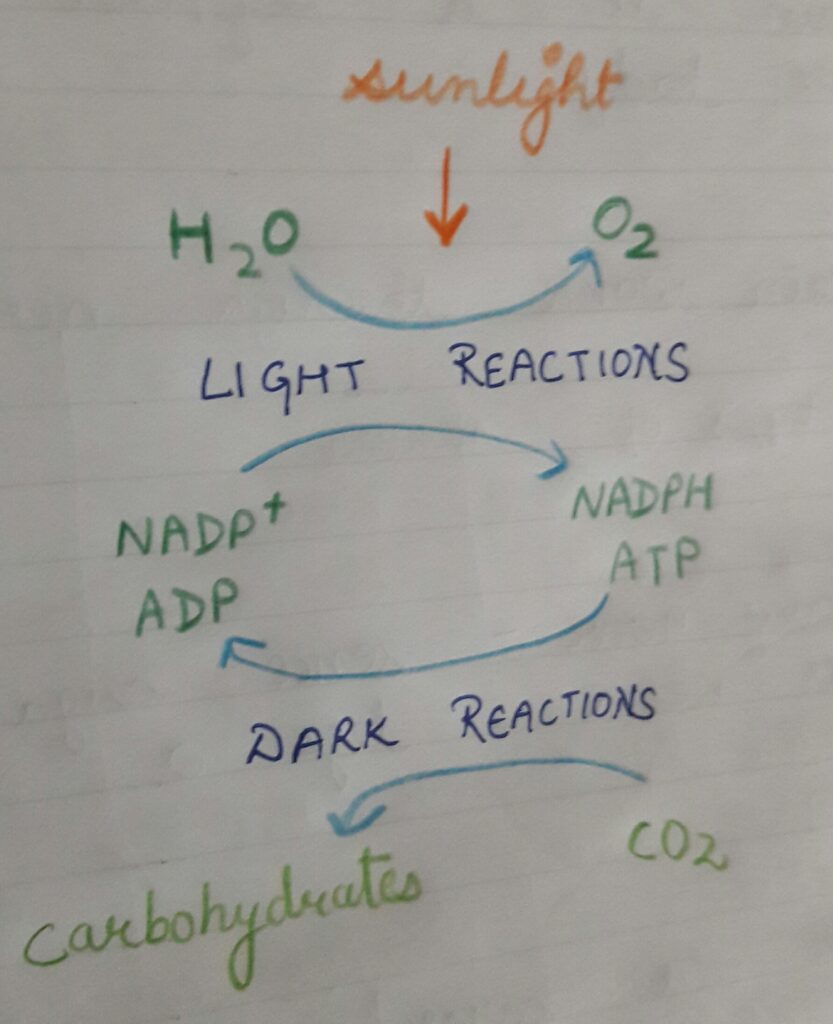 The two phases of photosynthesis are:

1) Light reactions also called as photochemical reactions is the first stage of photosynthesis that converts the light energy into sugar.

2) Calvin Cycle or light-independent reaction or dark reactions or carbon fixation reactions is the second stage of photosynthesis that converts sugar into energy in the form of Adenosine triphosphate (ATP) by cellular respiration.

Light reactions occurs in the grana which are stacked membrane present within the chloroplasts.

– Splitting of water takes place that provides electrons and protons (hydrogen ions, H+). It gives off oxygen as the by-product.

– Chlorophyll absorb the light that transfers electrons and hydrogen ions produced from water to an acceptor called as Nicotinamide adenine dinucleotide phosphate (NADP+).

– NADP+ is reduced to NADPH by adding electrons with H+. It also produces ATP by using chemiosmosis. This is called photophosphorylation.

Summary: In this process, light is absorbed by the chlorophyll and stored as ATP. Oxygen is released by the breakdown of water. NADPH are used to store H+ ions. Light energy generates NADPH and ATP. These molecules store energy in their chemical bonds that is to be used in the dark phase.

Dark reactions takes place in dark or in night and in stroma.

– The fixed carbon then reduces into carbohydrate by adding electrons. The reducing power is given by NADPH that is produced in the light reactions.

– The carbon dioxide then converted into carbohydrate by using chemical energy from ATP. ATP also produced by light reactions.

Summary: In light-independent reaction, ATP and NADPH that are produced in light reactions will be used to convert CO2 into glucose.